Red Bank Battlefield Park, located in Gloucester County, New Jersey, along the banks of the Delaware River, features the remains of Fort Mercer and the Whitall House, a Quaker homestead built in 1748. During the Philadelphia Campaign of 1777, Fort Mercer served as a crucial fortification to prohibit British navigation of the river. After the American forces delivered a decisive loss to the Hessians on October 22, 1777, the Whitall House, located just south of the fort, served as a field hospital where hundred of Hessians were treated. The dead are buried in a mass grave just north of the house. The scenic forty-four-acre park has existed since the Gloucester County Historical Society advocated for its creation in 1905. It is currently administered by Gloucester County’s Department of Parks and Recreation.

I had first heard of the Whitall House while teaching my graduate seminar in public history at Rutgers University-Camden, when a student reported on the site.  A few weeks later I spotted an advertisement for The Giordano Fellow in Public History, a partnership between Rowan University and Gloucester County.  The fellow would teach classes in public history at the university while also curating the Whitall House, which had been without a curator for two years and, like many historic houses, was struggling to keep a tour program going with a dedicated crew of volunteers.  Still, the house offered intriguing interpretive possibilities – Quakers with a Revolutionary War battle in their backyard.  Excited at the opportunity to both teach and actually do public history, I applied and received the Giordano Fellowship.

When I began in the summer of 2012, I quickly noted that Red Bank Park is extremely popular with the local community. Each year more than 200,000 visitors enjoy the views of the river, the walking trails, the picnic pavilions, and the playground. Visitation to the house, however, remained stagnant. Park visitors didn’t even seem to notice the Whitall House.  Admittedly, historic house museums can be intimidating. Where do you enter? Do you have to knock? Is it family friendly? Is someone going to yell at you to not touch anything?

I set about giving the house a public-friendly makeover. New signage announced the house’s hours. Giant “open” flags were installed around the house with a “please knock” sign indicating where visitors should enter. Volunteers staged colonial games outside the house to welcome visitors and encourage them to come inside. These modest changes grabbed visitors’ attention, and we began to see a steady increase in the number of visitors.

As visitation grew, it became clear the story we told was not connecting with people. Initially excited to explore the inside of the house, visitors soon lost interest and grew restless.  One of the biggest complaints visitors have with historic house museums is that they are boring. Tours tend to focus on decorative arts (in our case, furnishings), which have limited appeal to our primary demographic, young families. It became clear that we needed a new tour script, one that drew people in and facilitated a connection with the past.   We sought to emphasize a more inclusive view of the past, and I solicited the help of our volunteers to conduct research and then lead training sessions focusing on both content and delivery.

One of the more underreported stories of the Battle of Red Bank is the role played by African Americans, even though their presence was recorded on muster rolls and pension records. Luckily, former National Park ranger Joe Becton had already conducted extensive research on the subject, but while he had made this research publicly available for years, it had not been incorporated into the park’s interpretative program. Presently, the Whitall House has a number of volunteers specifically interested in the battle and eagerly embraced Becton’s research, while also adding to it.  The role African Americans played at the Battle of Red Bank thus became a key piece of our new interpretation. Matriarch Ann Whitall’s story also became grounded in eighteenth-century Quaker and women’s history. Volunteers, many of whom are active genealogical researchers, also enjoyed the challenge of seeking out the indentured servants who worked the Whitall plantation.  Once they had identified them, it was my responsibility to place those stories in historical context.  The story of Indentured servants thus became crucial to understanding how one family ran this once thriving plantation.

Our docents worked hard to engage the public in conversation that shifted the focus away from decorative arts and toward the histories of these people. We began framing the tours by asking visitors to “imagine you were a member of the Quaker Whitall family and your farm had just been seized to construct a fort. What would you do?” With this simple, provocative question, the dynamic of the tours began to change. Our visitors interacted more with the docents who welcomed this more conversational style. Visitors also engaged with each other, frequently disagreeing or sympathizing with people’s opinions and reactions. The colonial past ceased being so foreign and became much more recognizable in human terms.

We also began to slowly drop the “please don’t touch message” so familiar at house museums. Docent training sessions highlighted the role objects can play in facilitating interactions with the past. We identified objects that visitors could handle and began encouraging them to hold a piece of grapeshot, a musket ball, and lamb’s wool. This was (and still is) one of the more difficult challenges I faced in creating a new institutional culture. Many docents, deeply committed to preserving the Whitall House,  feared our visitors, once allowed to touch a few things, might then want to touch everything. By establishing clear and fair rules in the beginning of their tours, docents were encouraged to at least experiment with the new approach, but we are still working to encourage a more “hands on” experience.

Weeks of observation made it clear that visitors really liked our new approach but were frustrated that the tour was limited to the house’s first floor. I wanted to open the upper floors to the public but with no budget and very few furnishings, options remained limited.  I also did not want to give them simply “more of the same.”  So many times our visitors commented on the allure of a simpler time, free from cell phones and social media. By limiting our tours to the common areas of the house (parlor, kitchen, great room), we presented a very functional story of the past. This is how they prepared and cooked food. This is where they entertained. We didn’t challenge our visitors to think beyond what they were physically seeing.  As they snapped pictures of their children playing with a butter churn, it occurred to me how important it is to offer a more complicated picture of the past. By making the upstairs accessible, these private, intimate spaces could present a very different kind of connection with the past. Eighteenth-century bedrooms served as places of rest, but births and deaths occurred in these spaces as well.

To explore this theme, in 2013 we received a grant from the New Jersey Council for the Humanities to support a new exhibit, From Midwifery to Yellow Fever: Life and Death at the Whitall House.  Two bedrooms featured small installations, one focusing on childbirth in colonial America and the other, the Yellow Fever Epidemic of 1793, which killed several members of the Whitall family. We collaborated with Philadelphia’s Mütter Museum of medical history and borrowed birthing forceps and lancets used to bleed yellow fever victims. Visitors got to see the upstairs and appreciated our interpretation of the spaces. Time after time our docents heard women discussing their own childbirth experiences and frustration with medical treatments. Many families had used a midwifery practice for their own deliveries prompting conversations about how even though colonial medicine had its limitations, it also offered alternative practices still used today. 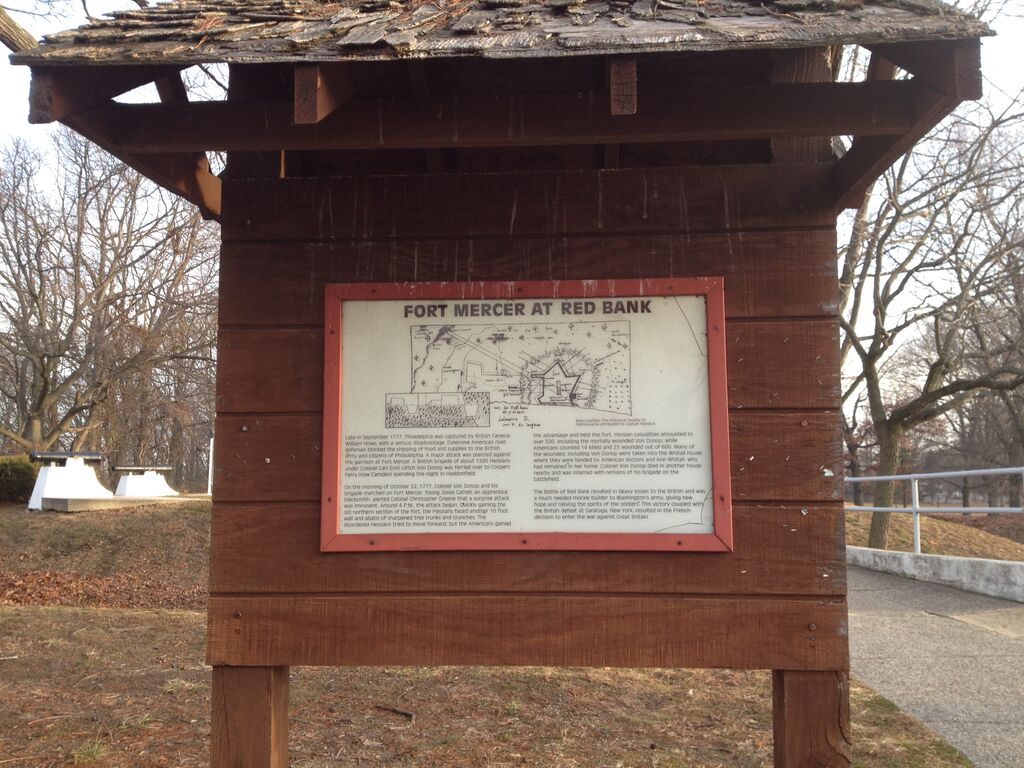 Beyond the Whitall House, Red Bank’s landscape offered us the opportunity to tell many additional stories.  Funds from the New Jersey Historical Commission enabled us to replace outdated, uninviting signage with markers that highlight the significant role the Battle of Red Bank played in the Philadelphia Campaign. First-hand accounts from both the Hessian and American soldiers provide an intimate view of the toll the war took on the participants, as well as the Whitall family. The park can also remind visitors that this was once a four-hundred-acre plantation. When I began my fellowship, a group of gardening volunteers had planted small plots in front of the house with medicinal, culinary, and dyeing herbs. Visitors frequently stopped to view the plantings; young families especially were very interested in exploring the gardens through taste, touch, and smell. Working with Gloucester County’s landscape architect, we envisioned a larger garden with plantings representative of the plantation period. Now, when visitors approach the house, they are met by heirloom vegetables, flax, healing herbs, and apple trees. By focusing on interpretation both inside and outside the house, we offer our visitors the opportunity to connect with the past through multiple lanes of interpretation.

No longer is the Whitall House a stagnant historic house museum.  Visitation to the house has grown by 75 percent, as each season new programming and interpretation draw both new and returning visitors. By working with our volunteers to think outside the box of traditional historic house museum management, we’ve developed a strong stakeholder community invested in the park’s future.

The relationship between Rowan University and Gloucester County continues. What began as a one year appointment has evolved into a 3/4 time faculty position renewed yearly. Rowan and Gloucester County both contribute to my salary, and I split my time between the academic classroom and historic site management and development. Both entities see the value in this relationship. Rowan is now able to offer classes in public history where I expose students to this diverse practice and share the realities of what happens in the field. Gloucester County now has an active and engaged historic site that can better serve the community. Through structured internships and volunteer opportunities, students learn about park management, programming, interpretation, marketing, and public relations. Rowan students have drafted new tour content, researched exhibit topics, developed engaging programming, and assisted on grant applications. Quite a few of these students have gone on to graduate programs in public history. They have embraced these opportunities and have contributed to an ever growing and diverse volunteer community.

So many historic sites and house museums continue to struggle with outdated scholarship and interpretation. Visitation to these sites is down dramatically. I am frequently approached by local sites looking for direction and assistance—everything from exhibit idea to grant assistance to volunteer training. The Rowan-Gloucester County partnership provides a truly exciting model for solving the problems of many of these sites.

Jennifer Janofsky is the Giordano Fellow in Public History at Rowan University and the Museum Curator at Red Bank Battlefield Park.